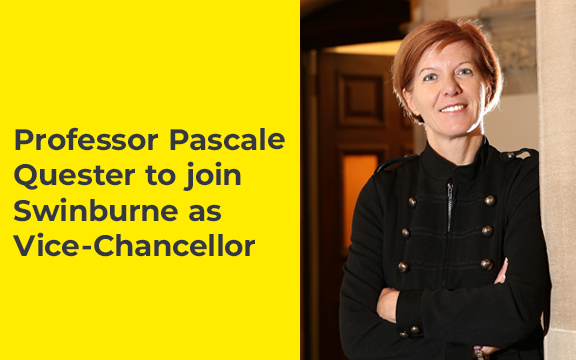 Professor Pascale Quester has held the position of Deputy Vice-Chancellor and Vice-President (Academic) at the University of Adelaide since 2011.

Professor Pascale Quester will take up the reins as Swinburne’s next Vice-Chancellor in August.

Professor Quester will join Swinburne from the University of Adelaide, where she has been Deputy Vice-Chancellor and Vice-President (Academic) since 2011.

Looking to the future

Swinburne Chancellor Professor John Pollaers says Swinburne is looking to the future in making this announcement.

“The recent weeks have thrown up extraordinary challenges to the Australian community. The university sector is responding – and I thank all who are making sure the university continues to operate in these times, supporting our students as they build their futures,” he says.

“We recognise that universities are national assets, critical to our future economy. We need to ensure we are continuing to make the right decisions for the future. It is in this context that I am delighted to announce Professor Quester’s appointment.

“Swinburne has established a strong and growing reputation as a new type of international technology university, and it is clear to us that Pascale has the vision, leadership and resolve to see us through the next chapter of our story,” he says.

Professor Quester says it is a terrific time to join such a unique institution.

“Blessed with a dual sector foundation and armed with the capacity and ambition to create and apply the science and technology needed to build a better future, I believe Swinburne can become the prototype of a modern, industry-embedded and value-creating technology university,” she says.

“Notwithstanding current headwinds, Swinburne is superbly poised for a bright future and I am honoured and humbled to lead the team and all staff through the next chapter of Swinburne’s evolution.”

Professor Quester begins her term in the role on Monday 3 August 2020, coinciding with the retirement of Professor Linda Kristjanson AO.

“The Swinburne Council and I could not be more grateful for Professor Kristjanson’s expertise and compassionate leadership at this time as in many ways we enter into unchartered territory,” says Professor Pollaers.

“Professor Kristjanson shines for her outstanding contribution and commitment to education in Australia.”

Professor Pollaers says he and Council will find a way to celebrate Professor Kristjanson’s strong leadership and legacy in the coming months, amidst the challenges confronting the university’s global community.

Professor Quester has led an impressive academic career, with a substantial record of research.

Her qualifications include a Bachelor of Business Administration from her native France, a Master of Arts (Marketing) from Ohio State University in the United States, and a PhD in marketing from Massey University in New Zealand.

Professor Quester is an active and respected researcher in the areas of consumer behaviour and marketing communications, authoring two leading textbooks and over 200 international journal publications. Her work has been backed by industry, as well as competitive funding bodies including the Australian Research Council (ARC).

As a strong advocate of global education, Professor Quester has been involved in developing links with overseas institutions in Asia and Europe. She has also held several visiting professorial appointments, including at La Sorbonne, Paris II, ESSEC Business School, and the University of Nancy.

In 2012 she was awarded the Chevalier de l’Ordre National du Mérite (the French Order of Merit), and earned the title of Distinguished Fellow of the Australian and New Zealand Marketing Academy (ANZMAC) in 2009. In 2007, she also received France’s highest academic recognition by becoming Professeur des Universités in recognition of her contribution to higher education in both France and Australia.