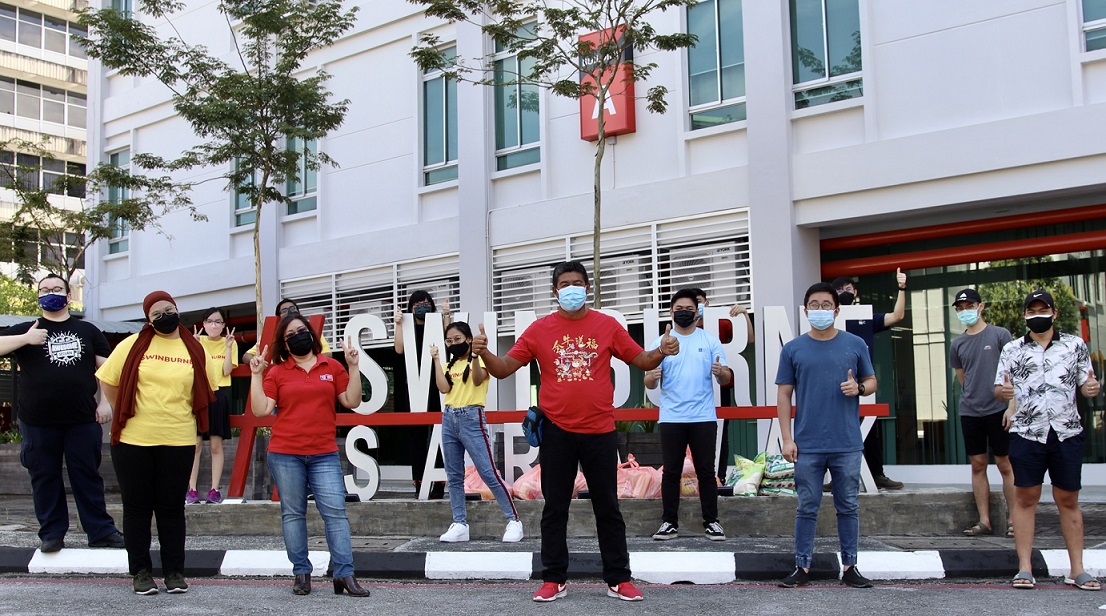 Team members of Giving Hands Charity Event and Kampung Quop representatives in a group shot during the handover ceremony at Swinburne’s campus.

The Giving Hands Charity Event was an initiative by the student council committees of the three private higher education institutions in a bid to help the needy struggling during the pandemic. Members of the public were invited to donate their food items at the drop-off points located at Swinburne and SEGi campuses over the period of one month.

Based on the list of items needed outlined by Kampung Quop representative David Ong, the students were able to collect 282 packs of biscuits, 267 packets of instant noodles, 139 cans of food, 101 cans of condensed milk, 99 1KG packets of sugar, 93 bottles of cooking oil, 82 5KG bags of rice, and other necessities such as flour, coffee, and hygiene products.

During the recent handover ceremony held at Swinburne’s campus, Swinburne Sarawak Student Council (SSSC) President Ann Marie Teng remarked that the project taught them the value of giving back and serving the community as one, especially during the pandemic.

“The Giving Hands project has won a special place in the hearts of those who were involved. It is when we give, that we receive, and it is through this initiative that we hope to inspire and touch lives to build a loving community,” she said.

For SEGi College Sarawak Student Representative Council (SRC) President Ivan Ong, while the project was a good opportunity for the students to build rapport between the three universities, the overwhelming support from the public was also a touching one.

“It was great teamwork accomplishing this project with the team, however we are most grateful to the community for their generous support which enabled us to bless the needy households with more supplies,” he shared as the team received more donations than its initial target.

Meanwhile, UCSI Sarawak Student Board President Max Lau remarked on the importance of communal service to bring together a caring community in times of need.

“Rather than being bystanders, when we are an active member of the society, we inspire others to do the same, creating a massive chain reaction of kindness and goodwill,” Lau shared.