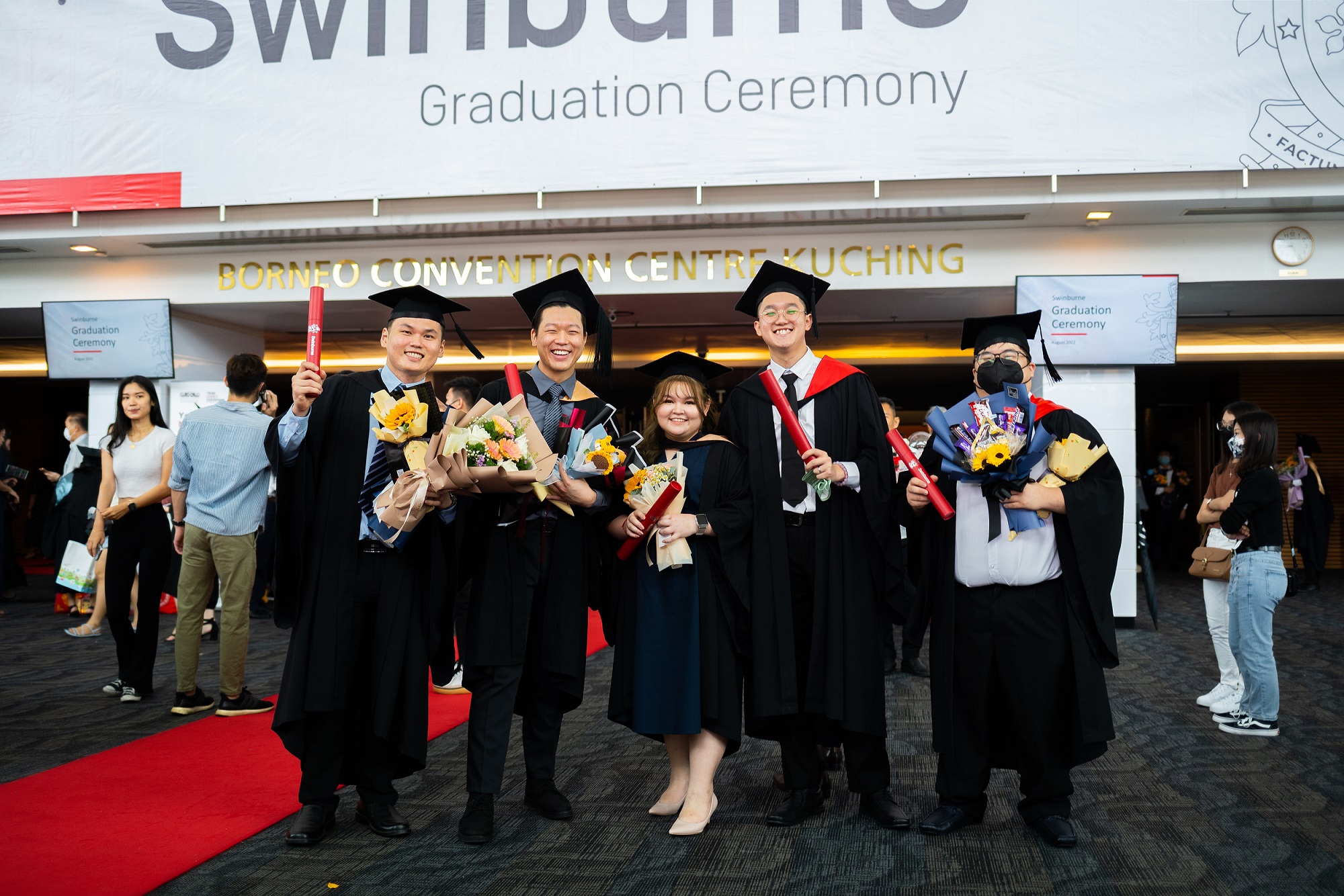 KUCHING – A total of 416 graduates of Swinburne University of Technology Sarawak Campus proudly received their scrolls at the university’s second graduation ceremony of the year on 30 August – the culmination of years of hard work, dedication and resilience.

The graduation ceremony, which took place at Borneo Convention Centre Kuching (BCCK), saw the conferment of awards to the graduating classes of 2020 and 2021. For undergraduate degrees, awards were presented to 207 graduates in the field of business, 139 in engineering, 19 in design, 11 in ICT, 24 in computer science, and 6 in biotechnology. For the Diploma of Business Management, two graduates received their scrolls.

Notably, the late Adrian Prakasa, who graduated with a Bachelor of Engineering (Robotics and Mechatronics), was represented by his father in receiving his award.

The attending graduates were from a range of countries, including Malaysia, Indonesia, Sri Lanka, China, Egypt, Nigeria, Pakistan and Zimbabwe.

Valedictorian Tan Si Xuan, who graduated with a Bachelor of Business (Accounting and Finance), described her experience at Swinburne Sarawak as one that she would definitely remember fondly.

“I have made lifelong friends who have not only accompanied me through the stress of meeting our various deadlines but also celebrated achievements together. I am also grateful to have met lecturers and tutors who are genuine and passionate in guiding me in my studies and direction.

“Being involved in Swinburne Sarawak’s clubs and societies has also taught me the responsibilities of being a leader, which will undoubtedly be valuable for me in the future. The journey was not always easy, but it was worth it!” she said.

On Swinburne priding itself on being the next generation university that connects students to their future, she said Swinburne had impressed her with its ability to innovate in its course delivery to provide real industry experience and soft skills that are transferable to a real workplace.

“Personally, during my final year capstone project, I was given the opportunity to work with the university’s notable industry partners such as Astro. This experience opened my eyes to the facets and challenges of being a working adult such as cooperating as a team, maintaining the quality of my tasks under time pressure and maintaining client relationships,” she said.

Tan expressed that she was rather overwhelmed with emotions at the thought of graduating. While she was proud of her achievements throughout her university journey, she felt some anxiety over the uncertainty of the future as well as sadness in bidding farewell to Swinburne and her friends.

“In a positive light, the future holds much excitement for me and I cannot wait to embark on the next chapter in my life,” she said.

Sharing some words of encouragement for graduates about to venture into the real world, Tan said, “At this stage in your life, the world is your oyster. In other words, we are young and have little to no commitments. Do not be afraid to take risks and grab opportunities. You will definitely make mistakes along the way, so learn from them instead of fearing them. Do not worry too much about the future because you are not supposed to have everything figured out. Good luck!”