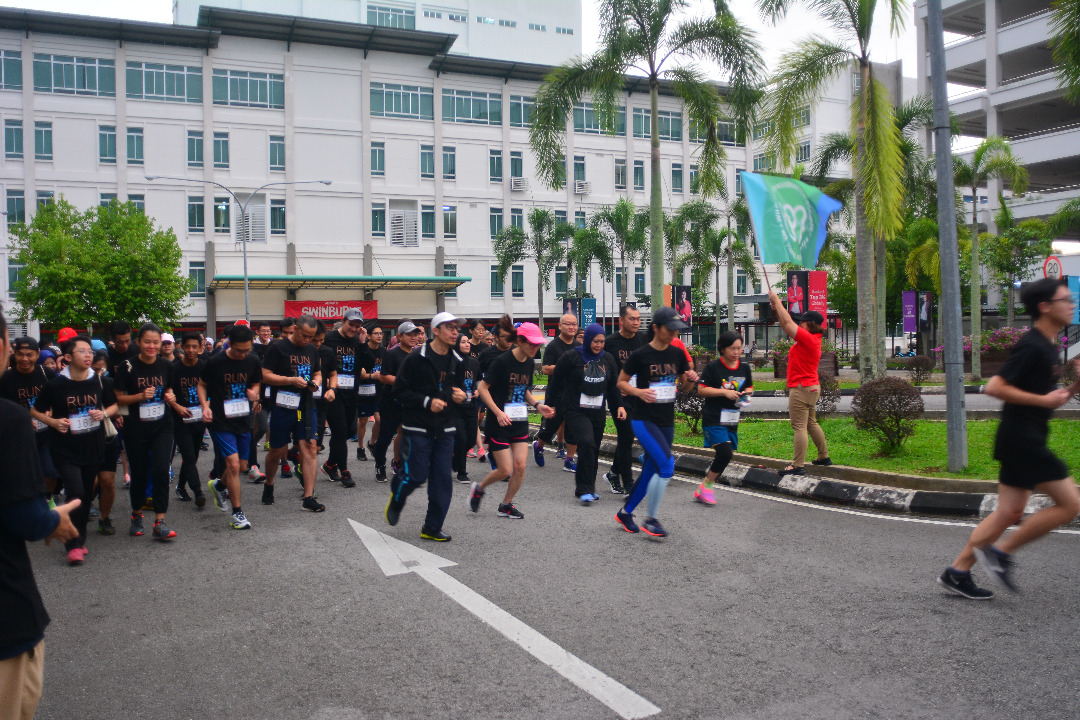 Esty flagging off the 5KM run at the actual Run for the Wild.

KUCHING – 821 virtual runners from 19 countries participated in the recent Run for the Wild event to support the conservation of orang-utans, sharks and rays in Sarawak.

The actual run flagged off from Swinburne’s Sarawak campus where more than 400 actual runners and volunteers joined the event. 15 corporations and nine non-governmental organisations (NGOs) also supported this year’s Run for the Wild by setting up booths with side activities for the runners, members of the public and volunteers to enjoy.

Dr Melvin contributing to the making of ‘Trash Art’.

Later, Dr Gumal gave a presentation to runners, volunteers and members of the public about the need to conserve our wildlife. To emphasise the reality of dangers faced by wildlife, actual footage of animals maimed by poachers’ traps and inhuman harvesting of sharks’ fins was presented. These were contrasted by videos of wildlife with their young in the protected areas where WCS is doing its field research, and supporting wildlife protection together with the federal and state authorities. Professor Wilson at his virtual run at the Melbourne Botanical Gardens.

Swinburne Sarawak has co-organised the annual Run for the Wild with the Wildlife Conservation Society since 2015. This year, the university’s Deputy Vice-Chancellor and Chief Executive Officer Professor John Wilson supported the cause by being a virtual runner twice. He ran at Mount Santubong and later at the Melbourne Botanical Gardens where he took an 8KM walk on the Tan Track.

Awareness of the conservation efforts of endangered species in Sarawak has spread all over the world due to the option to support the cause as a virtual runner. Among the virtual runners this year were 70 children aged 3-5 years from Prince Bishops Community Primary School in Bishop Auckland in County Durham, England. The children wore leafy hair bands and ran a relay race passing a fitbit to one another. Furthermore, the children were taught about the endangered species in Malaysia, with the teachers using PowerPoint slides provided by WCS Malaysia. In addition, teacher Juliette Murphy Fernandes from Prince Bishops Community Primary School organised an Adopt an Animal soft toy sale and a raffle in which the children had a chance to win a plush snow tiger. The proceeds from these activities amounted to £70.50 and were donated to WCS Malaysia’s conservation efforts.

Swinburne staff and students and members of the public are encouraged to support the conservation of orang-utans, sharks and rays by participating as virtual runners by 31 December. Interested individuals may sign up via www.runforthewildmalaysia.com/virtual-run/.