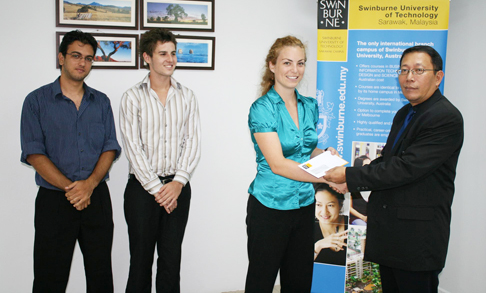 KUCHING – Three Australian students were recently awarded a scholarship by the Reverse Colombo Plan Scholarship Fund to pursue a semester of their studies at Swinburne University of Technology Sarawak Campus.

The scholarship amounting to RM6,000 for each student were presented by Tuan Haji Hussain Taiban, the Registrar of Swinburne Sarawak, to Haylee Fogg, Troy Adam Clinton and Mahmoud Mamoun Shaikh Mahmoud Naser, at the campus on Friday, 21 November 2008.

“I would not have been able to be here if not for the scholarship,” said Clinton.

“The scholarship is really a big help,” said Fogg. “I won’t have been able to travel without it.”

The Reverse Colombo Plan Scholarship Fund was initiated by the Sarawak government in 2001, with Yayasan Sarawak as the secretariat, in appreciation to Australia for training hundreds of its students under the Colombo Plan.

The Colombo Plan was established in 1951 and focused on education, sponsored by Australia, Canada, Japan, New Zealand, the UK and the US for the benefit of all the countries of South and Southeast Asia.

On their study experience in Kuching, Fogg said: “There is a lot of opportunity to get involved in campus activities and there is a really good on-campus community culture here (in Swinburne Sarawak). We took part in the grand opening of the campus in August and sang ‘Negaraku’ in the choir.”

“To me this is the perfect study environment. In the five months I’ve been here I could concentrate more on my studies than I could back home,” added Clinton.

He said the student-lecturer ratio is much smaller “and that’s great. It was also the multi-cultural learning experience as well, not only with Malaysian students but also with students from other countries. So it was great hanging out with people from all over the world and listening to their opinions.”

Clinton opines that the learning environment at Swinburne Sarawak is also more supportive.

“We really enjoy the food here and we’ve also discovered that in Kuching every event must involve food,” said Fogg.

Clinton added that he has not cooked a meal in four months “because I eat out all the time”.

The three students will tour part of Southeast Asia in December before returning home to Melbourne.