Brunei institution of learning looks at how Swinburne Sarawak does it 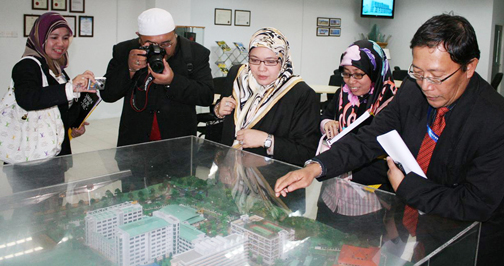 Haji Hussain Taiban (right) briefing members of the delegation on the campus. Hajah Pusparaini looks on with interest at third from right.

KUCHING – A delegation from a Brunei institution of higher learning recently visited Swinburne Sarawak to explore and study the operations two of the university’s departments.

The delegation from Institut Teknologi Brunei (ITB), which was recently awarded university status, is primarily interested in two areas: the registration of students and other functions of the registrar’s department; and the set up and design of the information resources department, or library, and the services it offers.

Made up of staff from the registrar’s office and library, the delegation was welcomed on arrival by Caroline Hon, Director of Administration at Swinburne Sarawak.

The visitors were briefed by Hussain Bin Taiban, Registrar of Swinburne Sarawak, and Dayang Zarina Binti Abang Ismail, Manager of Information Resources on the functions and services provided by their respective departments.

Also discussed were some of the challenges faced by Swinburne Sarawak as it developed from an institution to a full-fledged university.

“Our library is currently very small but we will be building a new one some time this year and it is expected to be ready in about two year’s time,” said Chief Librarian Hajah Pusparaini Haji Thani, who headed the delegation.

In preparation for that, she said, ITB is looking at how other institutions of higher learning are managing their libraries and registrar’s offices.

“Besides Swinburne Sarawak, we have also been to Curtin University (of Technology), University of Western Australia and Murdoch University to study their operations,” she said.

“The information from the briefing today was very useful and helpful,” said Hajah Pusparaini when handing over a memento to Hon after the briefing.

ITB is a government funded institution of higher learning and is undergoing an expansion of its campus.

Currently, it has more than 1,000 students