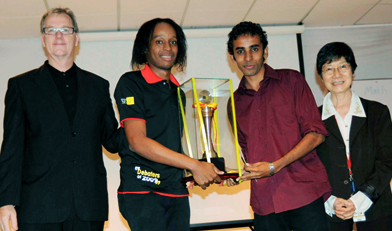 Fernando (second from right) and Swai are presented with the challenge trophy. They are flanked by Professor Helmut Lueckenhausen, Pro Vice-Chancellor and Chief Executive of Swinburne Sarawak (left), and Associate Professor Dr Wang Su Chen, Head of the School of Language and Foundation.

Swai of Tanzania and Fernando of Sri Lanka debated on the motion ‘This House believes that environmentalism in developing countries is the responsibility of first world countries’.

Fernando, a newbie to the Swinburne Debaters’ Club with no prior debating experience, also won the title of The Best Novice Debater.

The team of Paul Dylan Lim and Shaun Lim took the third runner-up.

“Winning the challenge title was a surprise for me although I sort of expected to win the Best Novice Debater,” said Fernando. “Working with Stephen as a team was a good as he is more experienced.”

The Bachelor of Computing student, who is in his first semester at Swinburne Sarawak, said he may take part in the upcoming Swinburne Public Speaking Challenge which will be held on 24 October, and encourages those keen to take part in debate to “be confident and know what you can do”.

Professor Helmut Lueckenhausen, Pro Vice-Chancellor and Chief Executive of Swinburne Sarawak, in his speech at the prize giving ceremony applauded the efforts of the debaters in taking up the challenge to participate in the competition.

“It’s really encouraging to watch the students getting up there and debating on relevant current events and issues. They’re applying critical thinking and oratory skills in a combination that’s really impressive,” said Christina Yin, the advisor of the Debaters’ Club.

“What’s best is watching the novice debaters progressing through the preliminary rounds and improving all the way to the finals,” she added.

A total of 24 students took part in the debate challenge while senior debaters, Swinburne Sarawak alumni and lecturers adjudicated the three preliminary rounds and the finals.

The annual competition, which is debated in the British parliamentary style, was organized for the seventh consecutive year by the Swinburne Sarawak Debaters’ Club.