Leo Club of Swinburne Sarawak gets thumbs up from Japan, Taiwan counterparts 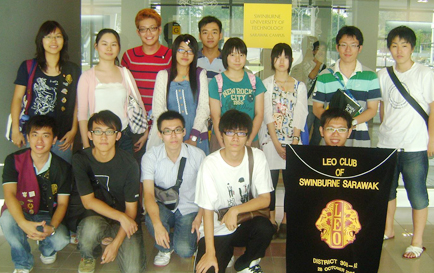 The visiting Leo Club members from Japan and Taiwan in a group photo with their Swinburne Sarawak counterparts.

KUCHING – Leo Clubs from Japan and Taiwan were impressed with the fund-raising projects carried out by their Swinburne University of Technology Sarawak Campus counterpart for the needy and hope to implement some of the activities in their country.

The eight visitors, four students from each country, who were on a cultural visit to the state called on the Leo Club of Swinburne Sarawak recently.

They were briefed on the club’s activities by its president, Danny Lai Voon Chin and “they found that the activities organised by the club were different from theirs but interesting at the same time,” said Gerald Ng, secretary and membership chairman of Lions Club of Kuching North who also translated for the visitors.

For example, Ng, an advisor for university’s Leo Club, said that the club has organises film premieres, car wash projects and took part in food sale to raise funds.
“Bu the two clubs have never done this and they hope to adopt these activities in their country,” he said.

“On the other hand, we learned that the Taiwanese club helps to clean up beaches and cemeteries while the Japanese group has done a telethon to raise funds,” Ng said.

After a campus tour, the visitors found the university “very modern and clean”.

“They were quite surprised to find out that there is a foreign branch university campus in Sarawak and that there are also international students here (in Sarawak),” said Ng, adding that the visit was an eye-opener for the visitors as they were of the impression that most preferred Europe, America or Canada but not Asia to further their studies.

“A couple of them from Taiwan are keen to study here (at Swinburne Sarawak) and plan to discuss this with their parents when they get home,” Ng added.

The Taiwanese group left for home on Thursday after spending two weeks in the city while the Japanese group leave for Singapore on Friday before retuning to Japan.