Much to gain from Industry-based learning, says automotive expert 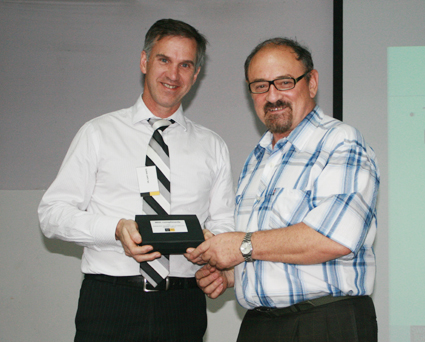 White (left) is presented with a memento by Professor Anatoli Vakhguelt, Head of the School of Engineering, Computing and Science, Swinburne University of Technology Sarawak Campus.

KUCHING – Industry, universities and undergraduate engineering students themselves have much to gain by their participation in industry-based learning (IBL), says an Australian industry expert.

Dr Gary White, research manager of Cooperative Research Centre for Advanced Automotive Technology (AutoCRC), said this when he was recently invited to speak on “The benefits of the industry-based learning programme to industries” at Swinburne University of Technology Sarawak Campus.

White said he highly recommends IBL, a programme where a third-year undergraduate student takes up full-time vocational training in the industry for six to 12 months, because it gives the student a strong career foundation.

He said when he set up his own consulting firm to provide engineers for other companies many of his clients sought those with some work experience or wanted to hire those who had gone through IBL.

“The industry is demanding this (IBL experience) because the student had already got the fundamental skills after three years (of studying) and understands the basic principles of engineering, so they were ready to attack quite difficult problems,” White said.

“So taking third-year students and putting them into an industrial environment where they have to work with a supervising engineer to deal with a problem is a great foundation for the students,” he said.

Besides growing in maturity, confidence and technical skills, the students are also able to apply what they learn from IBL into their fourth year (final) project.

Swinburne, White said, was a forerunner in putting together the IBL programme and over the years most universities in Australia offer some sort of sandwich programmes along these lines. “In fact, most large companies in Australia have developed their recruitment processes around this activity’” he said.

Later when he worked for General Motors, he took in IBL students who were recommended by their university. The great thing about this, White said, was that whenever there was a major hiccup with projects, the students were able to draw upon the expertise of their senior lecturers.

This in turn benefited the university, he said, because it now understands the requirements of the industry, and this is important because the industry itself is the customer.

The advantages are significant to the students and employers in the long term because “the students can actually solve a lot of problems as there are a lot of resources they can tap into,” White said.

Engineering students at Swinburne Sarawak have an option to take up IBL for six to 12 months. Over the years, a number have taken this path.

Meanwhile, AutoCRC was created in 2005 as part of Australia’s strategy to secure its position in the global automotive industry.