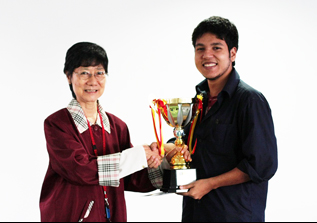 KUCHING – Bangladeshi student Md Ashikur Rahman showed that he has what it takes to be a good orator when he recently won the Swinburne Sarawak Public Speaking Competition for the second time in a row.

Ashikur, who was also last year’s public speaking champion, spoke passionately on the issue of global warming and in his presentation appealed to everyone to do their part in the face of rising temperatures around the globe.

The accounting major student was awarded the Professor Helmut Lueckenhausen Public Speaking Championship Trophy, named after the Pro Vice-Chancellor and Chief Executive of Swinburne Sarawak, and a cash prize of RM200.

Syed Sharbini Rafie bin Syed Habib, speaking about his journey to becoming independent through the guidance of his father, was first runner-up and awarded a prize of RM120.

For acting as a professor in presenting a case study on alternate universes and personalities, Paul Dylan Lim was second runner-up and received a cash prize of RM80.

Theruannah A/L Ratna emerged as the best novice public speaker. He was awarded the Swinburne Sarawak School of Language and Foundation Best Novice Public Speaker trophy and a cash prize of RM100.

Ugandan student Emmanuel Mwaka finished behind Theruannah in the overall speaker ranking after the preliminary rounds amongst new speakers in the debaters’ club, and was first runner-up best novice public speaker to win RM50 in the competition.

The award of The Most Humorous Speech went to Paul Dylan Lim for his rendition of the disasters in the founding of the Swinburne Sarawak Debaters’ Club. He bagged a trophy and prize money of RM50.

The annual competition was organised by the Debaters’ Club. Judges for the competition’s three preliminary rounds consisted of language lecturers and the debate trainer of the university while the final round was adjudicated by a pool of guests led by a senior toastmaster from the Azam chapter.

“We hope to encourage the use of English among our students, cultivate oral communication skills and also identify future potential speakers to represent the university in competitions through this event,” said Christina Yin, advisor of the Debaters’ Club.

Yin, a lecturer with the School of Language and Foundation, added that through the competition the university hopes to create an opportunity for the students to venture into other forms of speech as practice, and to promote the importance of public speaking in education and careers.