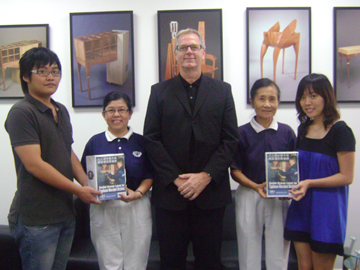 KUCHING – Students and staff of Swinburne University of Technology Sarawak Campus last month went into action after learning that hundreds had perished and thousands more were made homeless when Typhoon Morakot slammed into Taiwan.

Over the next two weeks, the Swinburne Sarawak Student Council (SSSC) which looks into the interest and welfare of students, and the university staff’s Sport and Recreation Club (S&R) set up booths at the university to collect donations for victims of the worst typhoon to hit Taiwan in 50 years.

Alex Lim and Phoebe Tan, president and secretary of the SSSC, respectively, recently handed over RM1,000 that were donated during the fundraising campaign, to representatives of Taiwan Buddhist Tzu Chi Foundation Malaysia’s Kuching office.

The handing over was witnessed by Professor Helmut Lueckenhausen, the Pro Vice-Chancellor and Chief executive of Swinburne Sarawak.

Tzu Chi Foundation, which focuses on giving material aid to the needy and has over five million members in 45 countries, is making arrangement for donations to be sent to the victims of Morakot in Taiwan.

The donation will be channelled to the foundation’s Malacca office before it is finally sent to Taiwan.

“We are grateful to everyone who had contributed to the donation drive. We hope that this will, in some way, help to make a difference to the victims of the typhoon,” said Edric Chan, president of the university’s S&R club.