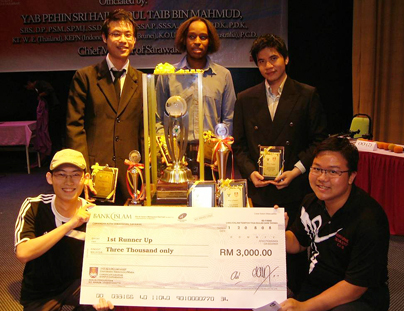 Swinburne University of Technology Sarawak Campus put up an impressive show to bag a series of awards in the final of the Yayasan Sarawak English World Style Debate Challenge Trophy which was held at Tun Ahmad Zaidi Adruce Auditorium, Institut Perguruan Batu Lintang in Kuching, on 26 August, 2008.

Debating on the theme The world food and energy crisis to the motion “This House believes that food should not be used as fuel”, its team of Nicholas Chong Ewe Hai, Stephen Obed Swai and Shariman Hoklai Bin Sarudu emerged First Runner Up.

More than 10 institutions of higher learning from Sarawak took part in the preliminary rounds of the World Style debate which was held at UiTM Sarawak’s campus in Kota Samarahan from 19 to 21 August.