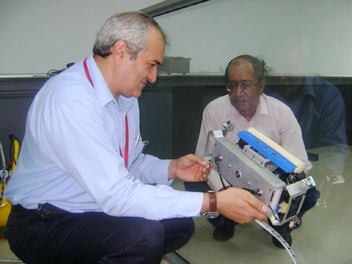 KUCHING – A team of researchers at Swinburne University of Technology Sarawak Campus has recently designed and built a unique robot that cleans windows on high-rise buildings.

The Window Climbing and Cleaning Robot, or WCCR in short, is a portable miniature robot that is capable of climbing windows with the aid of eight suction-cups below its body from which it attaches itself to windowpanes.

Measuring only 37cm x 18cm, sponges are affixed to the back and front of the robot and it cleans by moving in a zigzag fashion up and down the windowpane. It manoeuvres by utilizing its on-board electronics circuit which provides it with automated movement.

“Window cleaning, especially for high-rise buildings, has always been considered dangerous work performed by human beings. Accidents, either caused by human error or by nature such as sudden strong-winds, could cause the lost of precious lives. It is with this in mind that the robot was designed and built,” said Professor Nazim Mir-Nasiri of the robotics and mechatronics programme at Swinburne Sarawak’s School of Engineering and Science.

“The quality of cleaning the robot does is reasonable good compared to manual cleaning done by a human worker,” he said.

Considering that the human cleaner cannot reach outside the window, especially in high rises, this type of cleaning is a good option, Professor Nazim said.

“The designing, modelling, programming and manufacturing of the window cleaning robot was done entirely at Swinburne Sarawak,” he said.

Besides Professor Nazim himself, the others in the team were Dr Almon Chai and Dr Manas Kumar Haldar. Final year engineering students were also involved in the early stages of product design to prove the viability of concept.

“The exposure gave the students the experience of managing a real industrial project and their involvement is in line with the university’s aim of giving our students hands-on experience and preparing them to be job-ready when they graduate,” Professor Nazim said.

Started in 2008 and completed this year, the project was funded by Cradle Fund Sdn Bhd under its Cradle Investment Programme (CIP). The company funds groups of innovative individuals and researchers with technology-oriented ideas and transforms their raw ideas (pre-seed funding level) into commercially viable ventures.

“With the successful completion of the robot, many tasks that are being carried-out by people in relation to buildings can be easily substituted with the robot as it can also be easily converted to perform building inspection, surveillance and repair work duties,” said Professor Nazim.

The use of the robot for such tasks reduces or eliminates exposing workers to risky situations while performing their job. It will also help promote robotic research within Malaysia.

The next stage for the robot is commercialization, said the professor, and the research team will be searching for a suitable partner to assist in patenting the robot and its production.