EXPLORE
×
Home News Swinburne Sarawak gives back to the community

Swinburne Sarawak gives back to the community 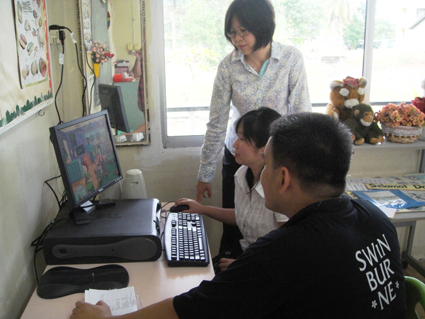 The one-year-old computers, donated by the university as part of its annual community service projects, will be used as teaching aids for the school’s intellectually challenged children.

Doreen Tie, principal of Perkata Special School, was grateful to Swinburne Sarawak for the contribution and said the donation was timely as most of the computers at the school are more than 10 years old and not working well.

“I would like to say a big thank you to Swinburne Sarawak,” she said, adding that computers are useful for enhancing the learning of intellectually challenged children as it makes the learning more interesting.

Present to set up the computers and brief teachers on the software were staff from the university’s information technology services department.

Tie said that as the operational costs of the school exceeds RM700,000 annually “the donation helps to reduce our financial burden and we can now divert our funds to other needs”.

The non-governmental Perkata Special School was opened in 1981 with an objective to create an atmosphere of joy and care where children can develop physically, intellectually, socially and emotionally.

Currently it has 136 intellectually challenged children aged from four to 17, with nine teachers and 12 assistants.

Headed by Dr Lau Bee Theng, a lecturer from the School of Engineering, Computing and Science, the project seeks to prove that computing and technology are not only developed for normal individuals but also for the needs of the disabled.

“We are trying to make computing more applicable in our lives and at the same time create awareness among the community of this special group of people. They deserve a normal life outside just like anyone else,” said Lau.

The flexible and repetitive mode of computer learning, she said, can be adapted to the slow learning mode of the special needs group and the three-dimensional and virtual environment act as a substitution or supplementation to their learning.

Members of the public who wish to donate or volunteer at Perkata School for Mentally Retarded Children may contact Doreen Tie at 082-426 301 during office hours.