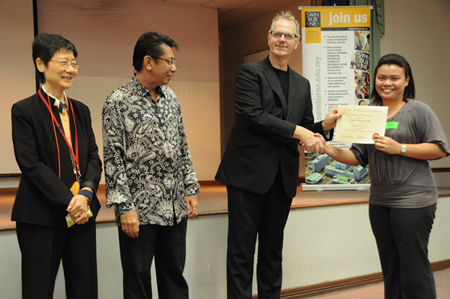 Lueckenhausen presents a certificate of participation a participant as Azmi looks on with Associate Professor Wang Su Chen (left), Head of Swinburne Sarawak’s School of Language and Foundation.

Organised by the university’s School of Language and Foundation, the workshop focused on the teaching of English writing skills. This was the first of an ongoing project that reflects Swinburne Sarawak’s contribution to the community particularly in enhancing teaching and learning skills in the English language. It is hoped that participants will be able to adapt and apply the language teaching skills learned to their own contexts in the real teaching environment.

During the sessions, the participants were involved hands-on in language games, role plays, writing dialogues and searching specific Internet websites for resources to be adapted in their lesson plans.

Feedback from the participants included “it was fun and enjoyable “ and that “we had to think on their feet and under pressure”, as well as that the activities helped them to “renew friendships and build rapport” among the teachers. Many expressed their wish for more workshops, including some on all four language skills.

At the closing ceremony, Azmi Bin Haji Bujang, District Officer of Lundu, in his speech said that the participants were fortunate that Swinburne Sarawak had organised the workshop for them.

“I presumed that it’s different from what you have learned at the (teachers training) college,” he said.

Azmi emphasised the importance of reading and shared how he was “hooked” on English language novels, and how reading books by authors such as Dan Brown and Michael Crichton as well as historical books by the White Rajahs of Sarawak helped him improve his English.

Azmi stressed that the reading habit should be brought into the classroom and should be inculcated as a family pastime, adding that if students don’t take an interest in English now it may be too late when they get to university.

Professor Helmut Lueckenhausen, Swinburne Sarawak’s Pro Vice-Chancellor and Chief Executive, encouraged the teachers in their endeavours, stressing the importance of using the language to learn it.

He said he learned English through using the language as a second language learner when his family moved from Germany to Australia when he was still a child.

After the event, Lueckenhausen said that Swinburne Sarawak is very conscious of its social responsibility and that the workshop was an example of its contribution to the community.

He also said that it was this reason that Swinburne Sarawak had offered Marina Undau a place at the university when her plight was made public by The Borneo Post recently. However, she had turned down the offer as she wanted to pursue a medical degree. Swinburne Sarawak does not offer courses in medicine.

Marina, who scored 9As and 1B in her SPM examination last year, was declined entry into a university matriculation programme over the controversy surrounding her eligibility.