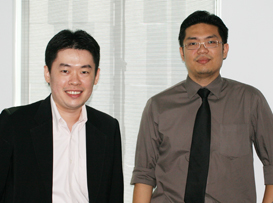 KUCHING – A team of researchers from Swinburne University of Technology Sarawak Campus and Multimedia University will embark on a project to design a software that will help verify and authenticate digital biomedical media such as x-rays and MRI scans, in June 2009.

Funded by the Ministry of Science, Technology and Innovation under its National e-Science Fund Research Grant scheme, the project will be led by Dr Dennis Wong, a senior lecturer from the School of Engineering and Science at Swinburne Sarawak Campus.
“The resulting software that will be developed will help biomedical practitioners verify the authenticity of digital biomedical media which they receive over the internet,” said Dr Wong.

He said that with the recent global shift towards digital archiving of biomedical media, it is increasingly important that the security and authenticity of these media are assured since readily available photo editing software can easily be used to manipulate such details for unlawful gains.

While storing, retrieving and sharing digital information such as x-rays and mammograms of patients among the medical community may now be the norm in the West, it also opens up the opportunity for abuse of this media, Dr Wong said.

“When an insurance company processes a health insurance claim for breast cancer, it needs to verify if the digital mammogram scan is genuine and belongs to the claimant,” he said.

“So one of the possible ways to enhance authenticity of the mammogram scan is to embed invisible information, much like the Agong’s image on your RM50 note, into the media when the scan is done,” explains Dr Wong.

He said that with this information, it can be determined if the mammogram scan is genuine or if it has been maliciously modified, adding that the software will also have the potential to restore the media back to its original state.

When used in combination with existing encryption schemes, one can greatly improve the level of security for existing digital archiving standards and communication schemes, such as the commonly used Picture Archiving and Communication Scheme (PACS) and Digital Image Communication Standard (DICOM). These schemes are used widely by the biomedical community in the United States and the European Union for storing and sending biomedical media.

The research project is an outcome of a memorandum of understanding signed by Swinburne Sarawak and MMU last year. It laid the foundation for the Information and Security Research Lab of Swinburne Sarawak to work closely with MMU’s Centre for Multimedia Security and Signal Processing.

To support the project, two research assistant positions with scholarship for Master’s degrees, are now available. More details can be obtained at http://www.swinburne.edu.my/career.php

With the funding from MOSTI, both institutions are also to build state-of-the-art digital acquisition facility for transferring existing films and x-ray scans, up to A3 size, to high definition digital equivalent. The facility will benefit the local medical community in digital archiving.