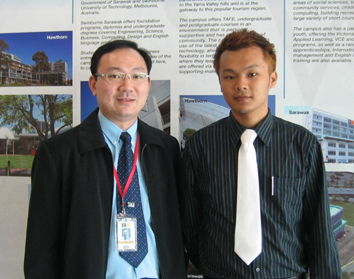 The Swinburne Sarawak IET student chapter was initiated by Dr Kho Yau Hee, a lecturer with the School of Engineering, Computing and Science, and its formation was spearheaded by Jarvis Ling Sing Kieng, a second-year electrical and electronic engineering student at the university.

The IET is one of the world’s leading professional societies for the engineering and technology community. It has more than 150,000 members in 127 countries and offices in Europe, North America and Asia-Pacific.

It provides a global knowledge network to facilitate the exchange of ideas and promote the positive role of science, engineering and technology in the world.

The Swinburne Sarawak IET student chapter, which will be launched officially in March, “is to serve as a platform for students to learn and network with fellow students and professionals in the various engineering and IT fields,” said Ling, who is also the president.

Through this, he said, members will be exposed to life-long learning in both the local and global context.

“Being a member of IET is a great way to get acquainted with the latest developments in the engineering and technology industries. We welcome students from the (university’s) School of Engineering, Computing and Science to join us as full-fledged members, and students from other schools (at the university) as associate members.”

Kho, the advisor for the chapter, has been appointed the inaugural Local Network Representative for East Malaysia by IET Malaysia Local Network.

“As the representative, I would be entitled to some level of administrative and budgetary resources to initiate the appropriate technical activities for our corporate members,” Kho said, adding that the main aim is to eventually set up an IET branch here.

A lecturer in wireless communication and signal processing, Kho has been an active member of IET since he was a student. He brings with him years of experience in the engineering industry and with IET while studying and working in Singapore and New Zealand.

“I have been active in the local network committees there, and was involved in the governance of the IET at a global level as an elected Member of Council and of Technical and Professional Services Board.”

Kho is among selected members from across the world who has been invited to attend the Young Professionals Summit and the Volunteers Conference Weekend which will be held in London in March this year. The events will discuss strategies of the IET in the 21st century.

“Swinburne Sarawak has been very supportive of the IET initiatives and I am honoured to be invited to the meetings,” he said, adding that the university is now well-placed in partnership with the IET for staff and students’ personal and professional development.

The newly-set up student chapter recently hosted 30 student and staff members of Malacca’s Multimedia University IET chapter during a visit to Swinburne Sarawak.