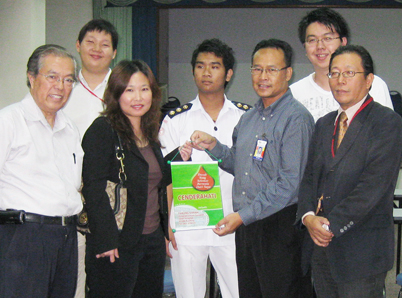 KUCHING – About 40 students and staff from Swinburne University of Technology Sarawak Campus responded to the call for blood donation on Wednesday, 17 September 2008.

“This is part of our ongoing campaign to replenish our stock. The response we received today was quite good considering that it was held quite at the last minute and that it is also the fasting month,” Boniface Anak Lasek, the Blood Bank’s public relations officer.

He said the Blood Bank needs all blood types but normally faces a shortage of types A and O, the most common blood types, and called on members of the public to come forward.

They can donate to the Blood Bank, located at the Sarawak General Hospital, from 8:00am to 5:00pm, Monday to Friday.

“Throughout the month of Ramadan, the Blood Bank will be opened from 7:30pm to 9:30pm every Wednesday to accommodate our Muslim friends who wish to donate blood after the breaking of fast,” said Boniface.

Meanwhile, the Leo Club of Swinburne Sarawak and the Kuching Chapter of the Malaysian Red Crescent Society will jointly organize a blood donation campaign at Swinburne Sarawak from 8pm to 12pm on Saturday, 27 September, 2008. It is open to members of the public.