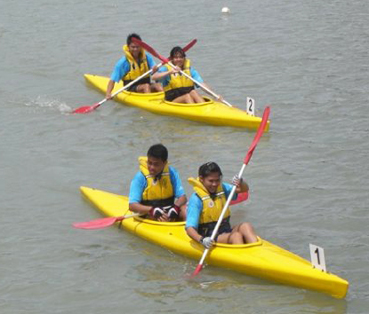 Swinburne Sarawak’s kayakers paddled their way into the finals of the Borneo IPT Water Sports Championship, which was held at Unimas in Samarahan, recently.

KUCHING – When a group of Swinburne Sarawak students competed for the first time in the recent Borneo IPT Water Sports Championship at Unimas in Samarahan, little did they know they would make an impression in the competition.

With no prior experience in the sport, let alone compete, the quickly-assembled kayak team made it to the finals, much to the surprise of their more seasoned rivals – and themselves.

Seven Swinburne Sarawak teams in the single, doubles and mixed doubles categories managed to break into the concluding stages.

The team owe their impressive run to a positive attitude and a fighting spirit. “I just wanted to try it out for the experience but also thought we could give them (competitors) a fight,” said Foundation student Nadia Kho Yinying.

“Although we lacked the experience, we believed in ourselves and moral was high,” said Tanzanian student Nabiel Abdulhakeem fuad bin-thabil al-nahbi.

Initially training, conducted by the university’s sports and recreation officer, was three times a week but this increased to two times a day as the competition drew closer. This was essential considering they had only about a month to prepare for the competition.

In the finals they were pitted against more experienced teams that had competed in state and national levels. Although the Swinburne Sarawak teams did not clinch any medals at the final stages, they were nevertheless emboldened by the experience and were more confident of themselves.

“I believe we could have done better if we had more training,” said Nabiel, who is keen to compete again in future.
Nabiel, a sports enthusiast, said he is hooked to kayaking and will be looking to be involved in the setting up of a club and promoting the sport. Swinburne Sarawak does not have an existing club for water sports.

“The training was tough,” said a more relaxed Kho, smiling as she looked back to the experience, “but I will want to be part of the team again in future competitions.”

The impressive performance of the novice Swinburne Sarawak kayak team caught the eyes of other team officials and coaches, who opined that with more training and the proper techniques the newbies could be a force to be reckoned.

UTiM Shah Alam took the championship title while Unimas and UMS were second and third, respectively. Although Swinburne Sarawak finished in sixth place, this may possibly be the platform for the birth of a potential contender in future competitions.