Swinburne shares the joy of Ramadan with ‘bubur lambuk’ giveaways

KUCHING – In the Ramadan spirit of giving, Swinburne shared the joy with the community during their ‘SwinCARE Bubur Lambuk 2.0’ where they distributed bubur lambuk at their drive-thru charity fare held recently.

As a popular tradition, bubur lambuk is often served during the fasting month and regarded as a comfort food for Muslims when they break the fast. The event was also an opportunity for the university community, particularly international staff and students, to try the local dish during Ramadan.

Due to the ongoing pandemic, the dish was prepacked in containers before delivery to the campus by a caterer, which were subsequently distributed to the recipients through a drive-thru giveaway. Prior to the pandemic, preparation of the rice porridge was typically a communal event where student and staff volunteers would gather to cook the dish on campus.

During the event, representatives from the various organisations drove up to the main entrance of the university’s Multi-Purpose Hall where they were handed containers of the bubur lambuk by staff members of Swinburne.

Swinburne’s Deputy Vice-Chancellor and Chief Executive Officer Professor John Wilson started off the event by distributing the dish, packed in 500ml containers, to a charitable body. He was accompanied by Registrar and Director of Student Engagement Esty Sharkawi. 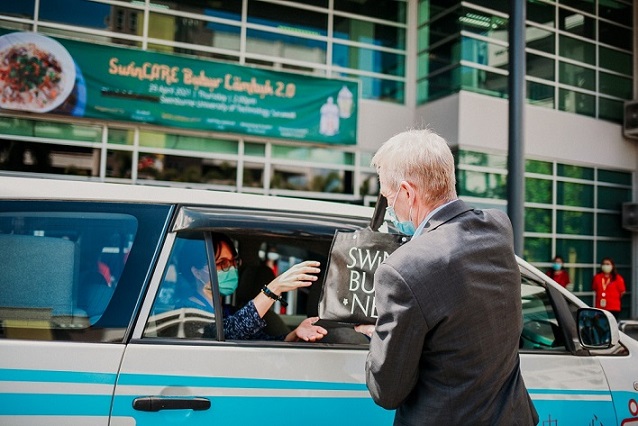 Also present were Acting Director of Marketing and Student Recruitment Caren Wong and President of Staff Recreational Club Mohamad Safaree Sapuan to hand out the meals made of rice, various types of spices, dried shrimp, and minced chicken.

According to Manager of Student Central, Student Engagement, and Event Chairperson Ruhazlina Syam Abdol Hazis, the bubur lambuk were shared with Swinburne’s closest neighbours to share the joy of ‘buka puasa’ and to bring a cheerful Ramadan to the frontliners and underprivileged communities.

Fong Yi Ci, Marketing Assistant from BMC Kuching, applauded Swinburne for the timely execution of the event as it moved swiftly from collection point to exit point, while Principal of PERKATA Doreen Tie commented that the event was well organised where the containers were delivered smoothly without long waiting period.

The event was initiated by staff of Student Engagement and supported by Staff Recreational Club, Marketing and Student Recruitment, and Swinburne Sarawak Student Council.