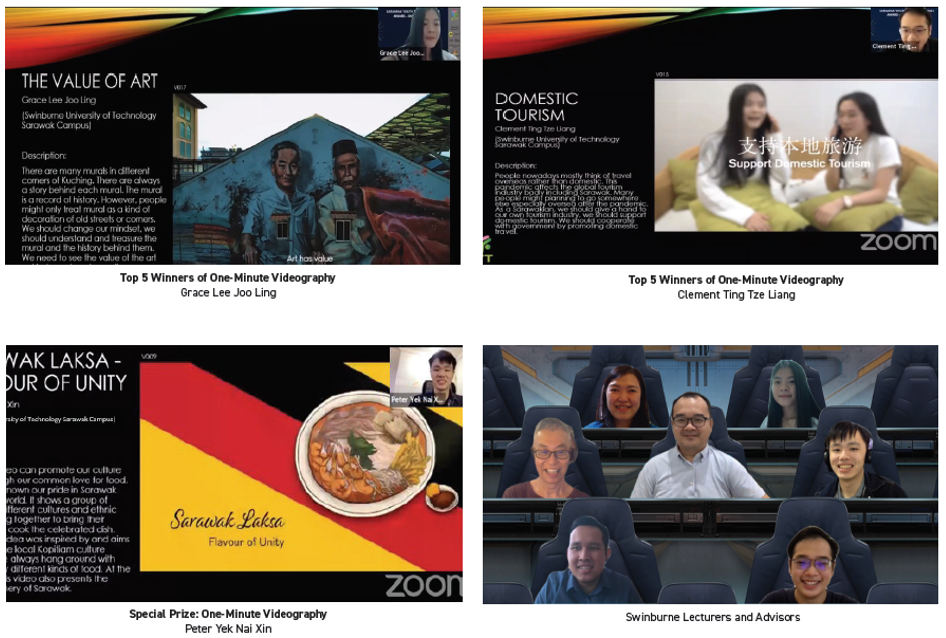 (Clockwise from bottom left) Yek, Lee, Ting, and a group shot with their Swinburne advisors.

With 239 universities, colleges, and secondary school students from all around Sarawak participating in the competition this year, three Swinburne students were announced winners in the one-minute videography segment under the university and college category.

Among five students who won the Outstanding Award in the university and college category, Swinburne Bachelor of Business undergraduates Grace Lee Joo Ling and Clement Ting Tze Liang were awarded prizes for their short videos entitled ‘The Value of Art’ and ‘Domestic Tourism’ respectively.

This year, the submissions were evaluated virtually by 20 national judges and eight international judges from various institutions, including Sarawak Tourism Board, AirAsia Regional Centre of Expertise Kuching and Emerald Publishing (East Asia).

SYT is an annual event co-organised by Sarawak Research Society (SRS) and UCSI University Sarawak Campus with the support of the Ministry of Tourism, Arts, and Culture Sarawak and Jabatan Pendidikan Negeri (JPN) Sarawak.

The event seeks to encourage responsible tourism behaviour among the young generation, inspire innovation, and offer a platform for them to be involved in responsible tourism development. The theme for this year’s competition was ‘Responsible Behaviour towards Tourism, Arts and Culture in Sarawak’.

Last year, three Swinburne students were also announced winners of two Outstanding Awards, as well as one Recommended Award in the same competition.