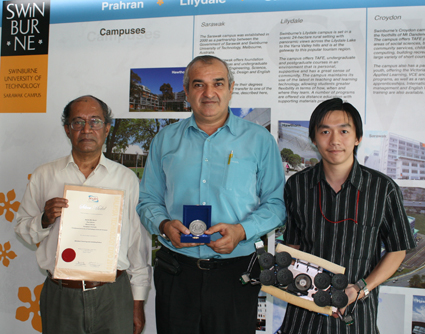 KUCHING – A robot that climbs and cleans windows which was designed and built by a team of researchers at Swinburne University of Technology Sarawak Campus scaled its way to the silver medal category in the recent Malaysian Technology Expo 2010 which was held at the Putra World Trade Centre in Kuala Lumpur from 4 to 6 February.

Measuring only 37cm x 18cm, the Window Climbing and Cleaning Robot, or WCCR in short, is a portable miniature robot that is capable of climbing windows with the aid of eight suction-cups on its body from which it attaches itself on windowpanes.

As it moves up and down in a zigzag fashion, sponges on the back and front of the robot clean the windowpanes. The aid of an on-board electronics circuit gives it automated movement.

The robot was the result of more than a year’s work by a Professor Nazim Mir-Nasiri, Associate Professor Manas Kumar Haldar, Dr Chai Almon Wei-Yen and teaching assistant Hudyjaya Siswojo of Swinburne Sarawak’s School of Engineering, Computing and Science

“We were sure of winning a prize for the project because it is well-done and I’m sure will also prove to be a useful product,” said Professor Nazim.

The robot was built for cleaning windows on high-rise buildings in mind. “Window cleaning performed by human beings, especially for high-rise buildings, has always been considered dangerous work. Accidents, either caused by human error or sudden strong-winds, could cause the lost of precious lives,” Professor Nazim said.

On whether the robot meets expectations, he said: “The quality of cleaning is reasonably good compared to manual cleaning done by a human worker,” adding that as a high-rise dwellers cannot reach outside the window to clean it, the robot is also a good option.

“There was a lot of interest in the robot at the expo and a number of organisations offered to collaborate with us on the commercialisation of the robot,” Professor Nazim said.

The designing, modelling, programming and manufacturing of the WCCR was done entirely at Swinburne Sarawak.

He said making the WCCR lighter and the speed it moves and cleans will be the next stage before it is patented and finally commercialised. “It would take at least a year to complete the entire process,” Professor Nazim said.

It is the major invention and innovation exhibition in the country. Its Invention and Innovation Awards were organised to inspire Malaysians towards incorporating innovation and creativity in their daily life. The categories of awards were categorised as special, gold, silver and bronze medals.

These are awarded in recognition of exemplary and outstanding inventions and innovations within a multitude of technology industries. Committed to the promotion and commercialization of science and technology, the Awards identify scientists and researchers that have achieved excellence in the commercialization of research and development, products and services.