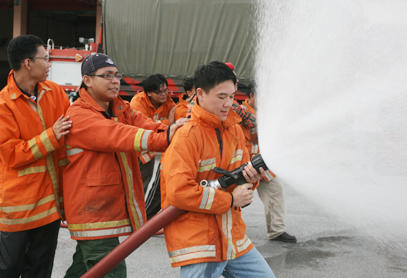 ERT-HOSE3 – Dr George Ngui, a lecturer from the School of Business and Design, is supported by colleagues as he adjusts the nozzle of the hose in putting out a fire during the third day of training at the Batu Lintang fire station.

KUCHING – Seventy staff of Swinburne University of Technology Sarawak Campus recently completed a three-day emergency and fire-fighting exercise under the supervision of the Fire and Rescue Department. The mix of academic and non academic personnel were put through their paces at the campus and the Batu Lintang station of the Fire and Rescue Department in preparation for their role in the university’s newly set up Emergency and Rescue Team where they will be the first responders in case of an emergency or fire.

“The training was a good opportunity for staff from the various departments to interact and learn to work together in the context of fire safety. The practical training was interesting, such as search-and-rescue and going through an obstacle course blindfolded (to simulate a blackout),” said Karen Kueh, a lecturer.

She opines that having an ERT is important for a university campus as the occupants of the various buildings are dispersed in different locations. “It’s crucial for ERT members to ensure that evacuations can be properly done in the event of an emergency,” she said.

“It (the training) is an eye-opener because it dispels some of the old wives’ tales we believe about fire, for example, a gas tank exploding. At the training we learned that a gas tank will not explode, even under intense pressure, so we should not be afraid to put out fire on the stove,” said English language lecturer Sylvia Chung.

“According to the Fire Department the first three minutes of a fire is the most crucial and if no one puts out that fire it will snowball into a disaster. In most cases, while waiting for the fire truck to arrive the responsibility will fall on the ERT to quickly evacuate people from the burning building or to quickly put out the fire while it is still under control,” Chung said.

“So in a nutshell the ERT is vital to any organisation because their quick action can save lives.”

Chung said she has learned a lot from the training but the most useful was “rescuing victims from a burning building”, referring to the training where lights at the campus’ lecture theatre were turned off to simulate a blackout and rescuers had to locate and evacuate injured victims.

The third and final day of training at the Batu Lintang fire station was physically demanding for some but Kueh said “it was good exposure for everyone to understand what firemen go through in their daily job”. There, they learn to work as a team and the techniques to put out fires.

“By going through the motions you actually know what it feels like to run with a hose, or climb up the ladders. These are something which you might not have the chance to do in your everyday life. I feel that this is the most important part, trying out the motions, doing what you will have to do,” said human resources executive Darren John Angking.

The 70 Swinburne Sarawak staff from all departments and schools across the university said they were now confident of what they need to do in an event of an emergency or fire and were grateful to the Fire and Rescue Department and Kuching Specialist Hospital for the training they provided.